Nothing done over the weekend as the next significant task is preparing the engine bay wiring and I was still waiting on the instrument sensor and ECU Loom.  Hooray - the instruments arrived this morning as promised, so I fitted the speedo sensor to the from hub and Myles populated the dash.

Sensor and cable routing combined with repeater cable.  With 205/50R15 Tyres having 900 revolutions/mile (thanks KugaWestie at WSSC) and 4 bolt heads the speedo start setting needs to be 3600 pulses and it has to over read so I might deduct another 100 or so - another thing to ask Mark at Westfield next time I need to call. - Mark confirmed the factory cars are set to ~3650 and emailed me a letter confirming the set up for the IVA as VOSA have problems testing car with front wheel sensors 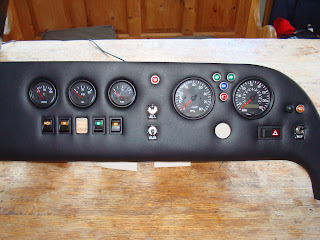 Myles followed the wiring diagram for the switch positions but having the washer so far away from the wipers doesn't seem to make much sense so we'll see how much flexibility there in in the loom to change them when we mate the dash to the scuttle.

Hopefully there will be some deliveries from Westfield this week that includes the ECU Loom that they are expecting from OMEX and then I should be able to get the engine installed over the weekend; otherwise it's back to the cycle wings that I put off doing this weekend!