The MoT achieved it's aim, in that it picked up a couple of things that I couldn't have done at home - Lambda emissions too high and, a really strange one, the n/s head light had the wrong shaped beam.  It should be level then divert up to the n/s but it was V shaped.  It has all the same markings as the o/s and is a sealed unit so I'm slightly bemused.
There were a couple of other items:  Wipers & Washer failed - I'd been using them on the way there so was surprised but the fuse had blown.
Fuel was leaking from the return coupling at the front of the tank.
Front n/s wheel wasn't fully torqued up - oops
In addition to the V beam, the n/s Head light couldn't be fully tightened to hold position.

Just to make my day the multiple starts and lack of a working alternator meant I needs a battery booster to get the car started for the drive home between rain showers.
On the way there I also noticed that the speedo wasn't working, I assume the most likely cause is that the sensor isn't close enough so I'll look at it in the morning. 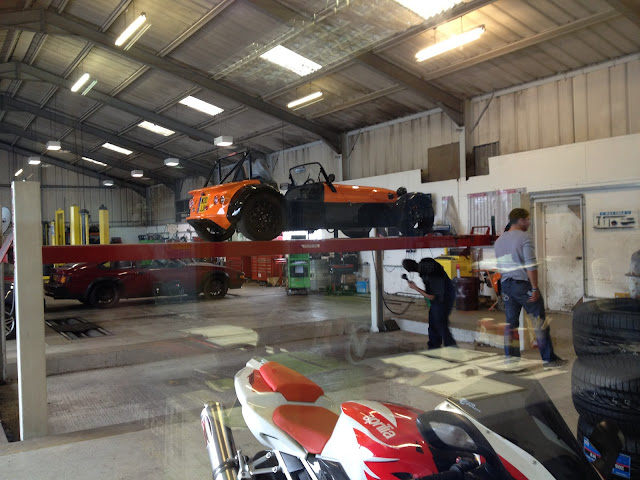 I've already fixed: (1) the wash/wipe (although one of the blades is very poor and leaves strips on the screen), (2) wheel torque and fingers crossed (3) the fuel leak. The head light looks like you have to press down/pull up on the head light as you tighten because the bolt spins inside the head light.

Luckily I've got a month to sort everything out before the IVA.  With all the messing about there wasn't time to do the wheel alignment so it's booked back in for Saturday and they're going to keep it for a couple of days to give themselves a good run at it.  They did set up the kit and check it and said that it wasn't too bad as nothing was wildly out but every wheel needed some adjustment!!!!!