I wasn't certain we would make it as I had a number of tasks to do before I could consider losing 4-5 hours going to Exeter.  The morning got off to a good start, I took the 807 to Quedam Tyres for its MOT and it passed so things were looking good.  Then on to Mike the Barber's, no one was waiting and the customer in the chair was more than halfway through his cut - Myles & I had our hair cut and we were home by just before 10:00.  Allanah had spent the night at a friend's house so there was no dancing taxi service required so - time to go to Exeter.

The sun was shining but it had been very cold over night with a ground frost so Myles and I wrapped up warm and set off.  After about 10 miles I had to admit that not fitting the side screens was a mistake and Myles looked frozen.  Over about 50 mph the hot air from the heater was completely mixed with the cold air coming into the car, lucky that Tricia had insisted that he wore a hat and gloves. 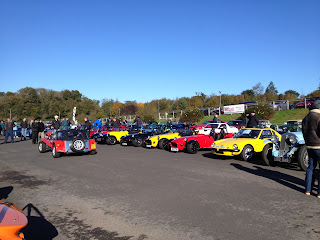 We arrived at the show at around 11:00 just as the car clocked up 200 miles, after a diversion to the public car parking and then back to the club car parking, we parked up in a row of 7 type cars the majority of which seemed to be Westfields. 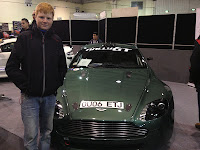 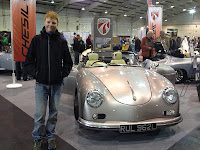 We then spent a couple of hours walking around the displays - Myles bought a balaclava, a Westfield fleece for the journey back and a BB Gun (don't ask!).  He also identified a couple of options for the next project (in his dreams)

The journey home was uneventful, Myles was very warm under all those new layers and we stopped for petrol: 14.11 ltrs to cover >100 miles so over 30mpg not too bad.  When we got home Tricia suggested the two of us go for a spin so we headed North through Ilchester, then on to the Mackrells before stopping at Heck's Cider Farm in Street.  The FW Boot just about took 4 ltrs of cider, <lb of Cheddar and Stilton cheeses and a jar of pickle. 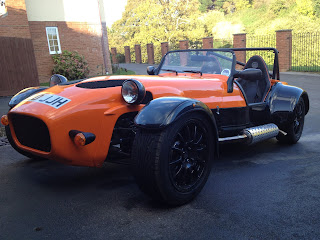 On arriving home I cleaned the car that has now covered just less than 300 miles.
Posted by jonjh1964 at 09:08