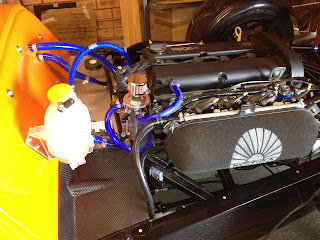 The day started with checking all of the cooling system hose jubilee clips and then  filling the cooling system with a 50:50 mix of lovely pink cooling fluid and water around about 5 ltrs in all.  After this the oil catcher was plumbed in and the exhaust "cheese grater" shield fitted.

After a break to walk the dogs and pick up 5.5 ltrs of finest unleaded on the way home the fuel tank got it's first contents.  I check around the engine bay revealed no leaks from the mornings fill of the cooling system so all was well.


So now for the engine start - all went well apart from the two David Bailey's entrusted to capture the event failed - don't know why but they did - hence here is a follow on video of James sitting on a cushion and playing with the accelerator.  After a worry about the noise that the engine was making I realised that my hot wiring skills were not great and the starter solenoid wire needed to be disconnected once the engine started.  Oil pressure 80 psi  dropping to 60 psi and water temperature ~90 deg C when the fan cut in - will check these again.  Unfortunately the tacho didn't work, a leak started from the gauge temperature sensor and the idle was all over the place.

After the engine start we fitted the wheels and lowered the car to the floor.  First task was to fit the n/s cycle wing, James did all the measurements using the o/s as a guide.  Next was checking the suspension set up with the front measured at 160mm and the rear to 170mm with no driver and the front wheels set to vertical/slightly negative camber with James plus extra weights in the drivers seat; these will all be re checked again later as I then realised that I could go any where near the n/s suspension with the cycle wing still bonding. 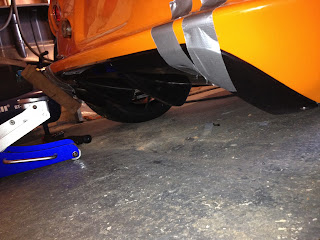 Then on to the rear diffuser - not a task that I was looking forward to - having previously drilled and counter sunk 3 x holes on the front lower edge I check the fit and all looked well.  After applying the sikaflex to the edge James and I loosely bolted it onto the body and then lifted the rear edge into position.  Lots of duct tape and using the trolley jack to hold the diffuser in place I was happy enough to walk away. 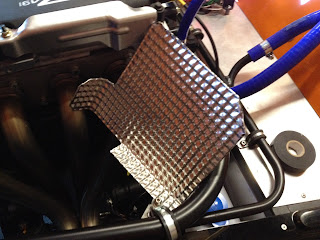 Final task was to fabricate a heat diffuser to be fitted between the exhaust manifold and the starter solenoid/motor.  I'd bought some Vulcan heat shield from Thermal Velocity and copied the design that Paul & Joe Bromley had used on their build.  The fabrication went well but I'll need to loosen the manifold to fit the shield to the chassis - Grand Prix was beckoning to time to finish for the day.