Got to the garage just after lunch and re-routed the Dash element of the harness as it shouldn't have gone through the Scuttle - the hole there is for the ECU cables.  James helped fit the Diff which took a couple of attempts because the bushes were too close together and we couldn't get the washer in on one side.  After a couple of different tries to move the bushes we used a flat screw driver to push the centre of the bush over enough; no problems with the bottom fitting. 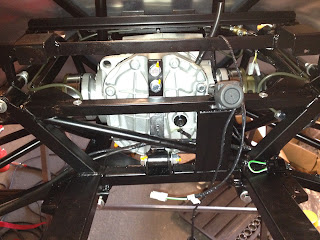 Fitted the rear wishbones and couldn't get the lower stud through the front bush.  A quick trip to Halfords and 2 hours of Emery clothing later and both fitted so assembled the rear suspension and fitted the drive shafts with 3 bolts in each. 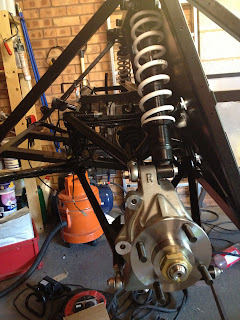