The last of the Christmas parcels arrived during the week and, with the snow and ice, I wasn't willing to test my limited Westfield driving experience on the road - so out to the garage for upgrades!

I'd removed the instruments last week in an attempt to dry them and stop the fogging so they've been in the airing cupboard/hot press but I got the fuel gauge out to try and isolate whether it was the sensor or gauge.  I'd already confirmed that the wiring was correct when I removed the gauges, and after the gauge back in, it was reading 3/4 which was roughly what was in the tank.  I disconnected the sensor input to the gauge went to full deflection and then shorted and it went to empty so I guess it must have been a loose connection. 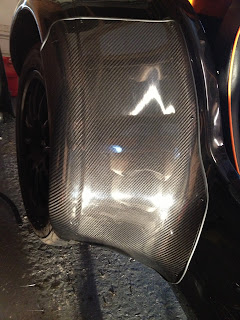 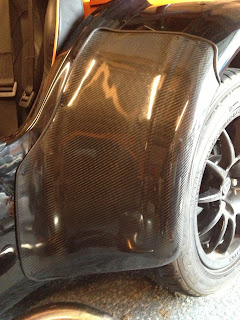 On to the first upgrade - CarbonMod Stone Guards - I fitted the rubber beading around the edges and then drilled and riveted them in place.  A reasonable fit but I then noticed that they were slightly asymmetrical - hopefully it won't be too noticeable 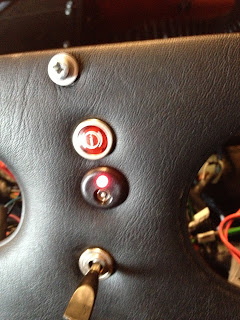 Then on to the Cobra Immobiliser - I used the dedicated connector in the WF chassis loom, mounted the immobiliser on the ECU panel and the indicator/key point in the dash (a little askew).  A bit of a fiddle wiring in all the independent supplies and earths but it was fairly straight forward and worked first time - miracles will never cease. 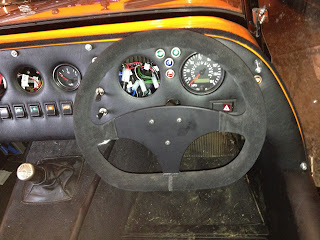 Next was the steering wheel with quick release.  First steps were to replace the upper steering column inner and fit the quick release to the steering wheel (measure, measure and measure again before drilling!).  I was also trying to identify a resonance somewhere in the steering at idle - nothing obvious so hopefully between greasing the column and making sure it goes through the middle of the dash cut out will be the cure.  Everything still needs torquing so didn't refit the pedal cover etc. 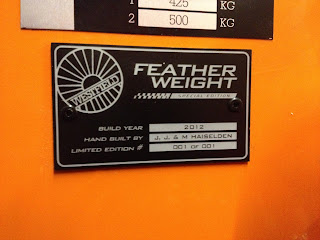 By this time the -2 deg C was beginning to take it's toll so the last thing was to rivet on the build plate next to the VIN plate.