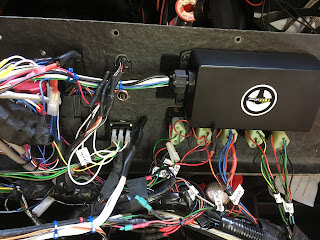 After wiring the transponder to the steering wheel the next step was to install the receiver in the car.  I mounted the main unit just above the rocker switches and the headlight relays where the BlinkStop had been fitted previously.  The wiring was straight forward - power and earth first then confirm that the two unit talked to each other.  Next I wired up Channels 1 & 2 as a BlinkStop largely replicating the wiring I'd just removed except that the toggle switch had to be wired to the output of the unit rather than input so no auto cancel on the backup.  The final element of the BlinkStop was the brake sensor, again using the wire installed previously. 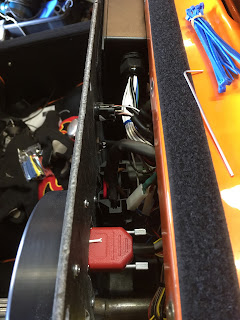 Channel 3 was wired the BeamStop which needed a pair of relays, one to replace the dipped/full beam switch and the other to switch power for the flash capability.  Channel 3 had to be wired to switch 12V to activate the relays.  When the lights are off pressing the blue FreeWheel switch flashes the headlights and when they're on it toggles between full and dipped beam.  Finally I used channel 6 as the horn, again wiring  the receiver channel in parallel with the dash switch to give a back up capability.  This gives me four spare channels for future expansion.   The wiring is a bit of a bird's nest but I've kept the Westfield Chassis Loom standard just in case I ever want to go back to the analogue gauges and also kept all the additional wires for the digidash and FreeWheel to that I can add functionality at a later date.  Plus I have the extra looms for the windscreen heater and electric mirrors.

Tricia and I have now covered about 120 miles in the car since installing it and the Freewheel has been faultless throughout - having a headlight flash is very useful and I've used the FreeWheel software to adjust the BlinkStop times to see what suits me best.  I've also slightly modified the switch panel on the steering wheel as it was slightly blocking the Digidash.